Whooo Are Those Owls on Ladd Marsh?

Owls are an important component in the ecology of Ladd Marsh. Birders who go looking for them have opportunities to spot, observe, photograph and hear nine varieties and a tenth is readily observable in nearby forests. Owls are from the family Strigidae except Barn Owls whose family is Tytonidae. They are mainly nocturnal predators with large hooked bills and sharp talons. They share a distinctive large head, prominent eyes, facial disk and upright perch. 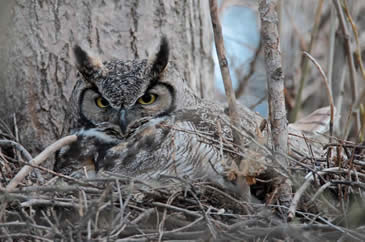 The commonest and largest owl on the Marsh in the Grande Ronde Valley is the Great Horned Owl. Others include Barn Owl, Common Screech Owl, Northern Pygmy Owl and Short-eared Owl. Burrowing Owls and Saw-whet Owls have occasionally been seen. All of these species have been known to nest on the Marsh. Recently Long-Eared Owls have been seen on the Marsh and two nests have been documented. Great Gray Owls and Flammulated Owls inhabit the Glass Hill area. A roadkilled Great Gray was found, and is now mounted at the Headquarters. There are one or two past records for Snowy Owl sightings.

Great Horned Owls are the easiest owls to spot because of their size, 22” length and 44” wingspan, and because they occur in the largest numbers and live year-round in this area. They are especially common in winter and easy to see because trees are bare. They court during winter and their rythymic hoos, often four or more hoots, are commonly heard at dusk. Females answer courting males with a low nasal barking sound. During daylight hours Great Horned Owls are often found near the center of trees and they move higher as they begin hunting after a day of inactivity. Their prey includes rodents and other mammals up to rabbit or skunk size. They also take birds including ducks, geese and hawks. They swallow prey whole or tear it into chunks, later excreting indigestible bones and feathers. 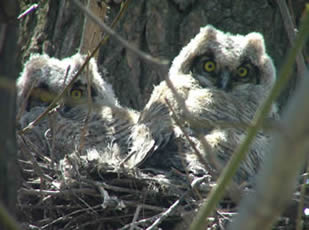 Nesting areas can sometimes be identified by mounds of owl pellets at the base of trees. Sometimes Great Horned Owls can be spotted when they are harassed by other birds including crows and robins since they will take young birds from the nest. They are also known to take Barn Owl babies. The eyes of the Great Horned Owl, like all owls, are fixed so their heads move as they search for prey. “Ear” tufts are actually feathers and are widely spaced. Their flight is silent. They nest in cavities or take over crow, eagle or hawk nests in treed areas and on rock ledges in cliffs when trees are not available. Great Horned Owls generally lay 3-4 eggs. Incubation is by the larger female only but both parents feed the young. The young leave the nest 9-10 weeks after hatching but often remain nearby and can be seen perching together, sometimes with a parent bird in the same tree. Young owls are fuzzy white and change to a buffy color until they reach full-size.

Great Horned Owls nest on both sides of Wilkinson Road east of Peach Lane in old willows and cottonwoods and are common residents of area windbreaks. 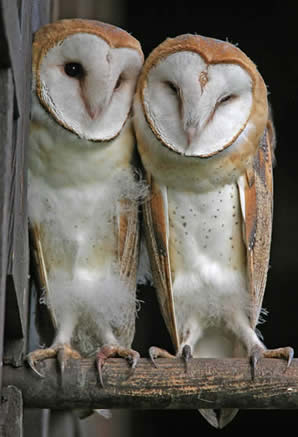 Barn Owls have no ear tufts but the large white or light-colored heart shaped facial disk is distinctive. The back is tawny and underparts lighter. They grow to 16 inches long with a 42 inch wingspan. Their hearing is keen and they can locate prey in total darkness by sound alone. Unlike Great horned owls, they hiss rather than hoot and their call has been compared to snakes. Females are larger than males. They hunt rodents at night, roost during the day in trees, occasionally in burrows or in structures: barns, sheds, haystacks. A pair nested over the north doors of Inlow Hall on the EOU campus in the recent past. Nests are in tree cavities or nest boxes. Unlike other owls, they breed at any time of year. They lay 3-11 white eggs on the bare floor of a nest box, shelf or cavity. The downy young leave the nest in about 8 weeks but flop around nearby for another month as they learn to fly. 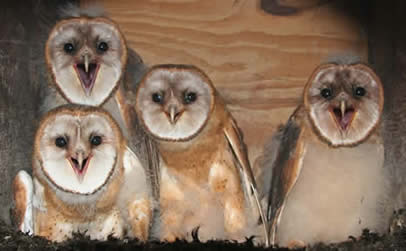 Barn Owls are often victims of night-time traffic and are seen along roadsides in rural areas. 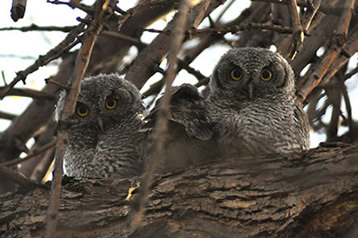 In the west, Screech Owls are brown or gray with white spots. L 8.5”, WS 20” . They live in Union County year-round where they inhabit forests, farms, orchards, parks, woodlands and riparian areas. They have yellow eyes and short ear tufts. Calls include barks and a long series of hoots. They prey on smaller rodents, birds and moths and crickets. They nest in tree cavities and nest boxes. They are nocturnal and roost during the day in brush, tree snags or buildings. Screech Owls lay 2-8 white eggs which are incubated for 26 days. The downy young leave the nest 4 weeks after hatching. 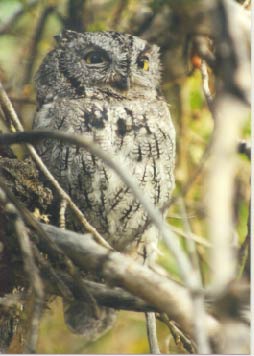 A Screech Owl nests in the box at the east end of the shed at the parking area north of Hot Lake Lane at the Marsh and can be seen hunting in the evening. 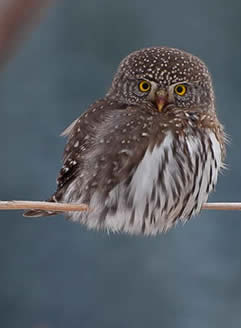 Northern Pygmy Owl is the smallest owl on Ladd Marsh. L 6.75” WS 12”. They are brown with white spots and streaked breast and belly, long tails and yellow eyes. The back of the head has two black false eye spots outlined in white. They live in the area year-round in conifers and mixed forests, especially in areas with openings rather than solid dense stands of trees. They nest in the canopy and can sometimes be spotted when they are scolded by songbirds. Their prey is small rodents, large insects and occasionally small birds. They nest in tree cavities or nest boxes and lay their 2-7 white eggs on the bare floor. Incubation is about 28 days by the females only. The young are fed by both parents and are fully fledged in about four weeks. 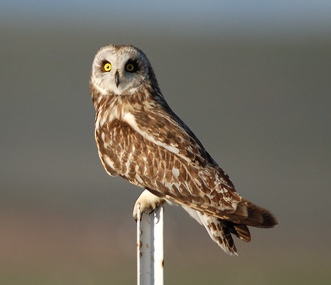 Short-eared Owls are found in open marshes and fields and often seen in daylight. They are active day and night. L 15” WS 38”. They have narrow wings and are sometimes mistaken for Northern Harriers. They fly higher than other owls. Females are brown with darker breasts, a large buffy area on the wings and dark barring on the wingtips. Males have paler breasts. The short ear tufts are more visible on males, are close together and are near the center of the crown. They are round-headed.

Short-eared owls are silent except during nesting. The male gives muffled poo poo poos and both sexes give high nasal barks when alarmed. They also make wing-clapping noises like a cracking whip. Their prey is mostly voles, other small rodents, insects and small birds. They nest on the ground in shallow grass and feather-lined depressions and produce 4-9 white eggs. Incubation is about 21 days by the female only. The downy young are fed by both parents and fledge in about 6 weeks. Several pairs may nest close together. 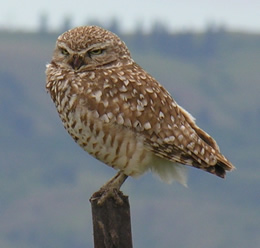 Burrowing Owls are diurnal. L 9.5” WS 21”. They are brown with buffy barring and spotting. They have white “eyebrows, long legs, and narrow wings. They inhabit open grassland where they take over burrows of badgers, gophers, and other rodents, which they use year after year. They often nest in small colonies and one adult at a time will act as sentry. They perch on the ground and on fence posts and bob up and down when alarmed. Their prey is large insects, small rodents, and small birds. Five to 11 white eggs are laid on the bare soil in the burrow. Incubation is about 28 days, probably by both parents. The downy young emerge soon after hatching but remain near the nest for long periods. They have a variety of calls, especially a raspy call of alarm but also sometimes bark, smack and warble. 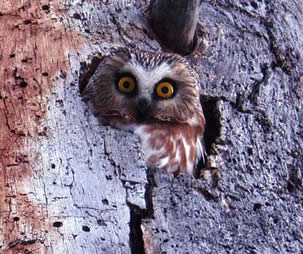 Saw-whet owls are small round-headed owls with no ear tufts. They are dark brown above with lighter streaked underparts. The young have a distinctive white triangle on the forehead which is less dramatic in the paler buffy facial disk of adults. They live in mixed woods where they nest in tree cavities or nest boxes. They are short-tailed and have distinctive quick wingbeats below the horizontal. Their call is rhythmic low whistled notes rapidly repeated.. They nest in woodpecker holes or cavities but also use nest boxes. Four to 7 white eggs hatch in about 4 weeks and the downy young leave the nest in 4-5 weeks. 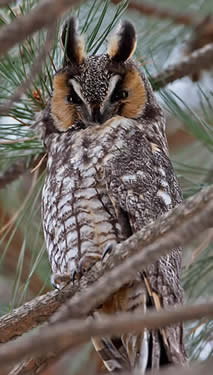 Long-eared Owls are slender tall birds with long ear tufts closer together than the tufts of Great Horned Owls. L 15” WS 36”. The facial disk is tawny orange with dark vertical stripes through the eyes. They are brown above with dark streaking on the breast and belly. Their wings are slender and shorter than the Short-eared Owl. They live in dense forest where they take over the nests of hawks, crows, magpies or squirrels. Incubation is 26-28 days by the female only. Young leave the nest after 5 weeks. They prey on rabbits, shrews, rodents and occasionally birds. Two Long-Eared Owl nest have recently been confirmed on the Marsh. 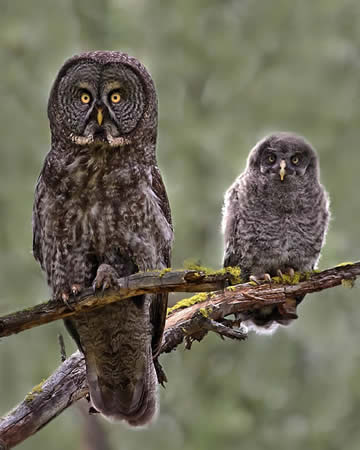 Great Gray Owls are the largest North American Owl. L 27” WS 52”. They have an especially large head with large facial disk, long tail and broad wings. They are fluffy and actually weigh less than Snowy Owls and Great Horned Owls. They live in coniferous forests. They are gray or brown. Seen in profile, they appear flat-faced. They are primarily nocturnal but when prey is in short supply they also hunt in daylight. They take small mammals, crows, and smaller birds. Incubation of 2-5 white eggs is 30 days. Downy young leave the nest after 5 weeks but remain close and are fed by both parents for several weeks. They prefer to nest in dense forests where they use abandoned hawk or eagle nests or lay eggs on large stumps. They will also use nesting platforms. They have little contact with humans and sometimes can be closely approached. In winter they sometimes move to lower elevations in loose flocks especially where prey is plentiful. Great Gray Owls live in forested areas of Union County and possibly occupy the Glass Hill area of the Marsh. 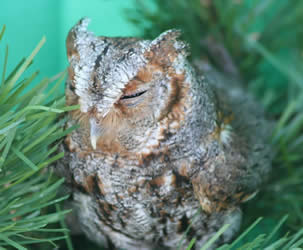 Flammulated Owls are small, about the size of a downy woodpecker or large sparrow such as a white-crowned sparrow and are similar in size to the Northern Pygmy Owl. L 6.75” WS 16”. It may be the hardest owl to spot on Ladd Marsh because its habitat is limited to the forested areas of Glass Hill, it is a summer only resident, and because its intricate black, gray, brown and rusty markings, dark eyes and short ear tufts provide perfect camouflage. It is called a ventriloquist because the source of its low muffled hoots is difficult to pinpoint. It is nocturnal, hunting just before dark and dawn for moths, beetles, spiders and grasshoppers. Occasionally it will take a small bird or rodent. During the day it roosts in cavities or against a tree trunk. Flammulated Owls nest in old woodpecker holes, laying 3-4 white eggs. Little is known about incubation or fledging because they can be difficult to observe.